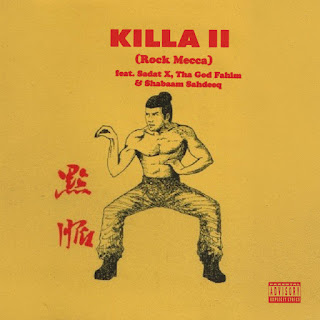 Rock Mecca recruits more trained assassins to kill the track on the second installment of "Killa". This time Rock is joined by legendary Brand Nubian emcee Sadat X, true school veteran Shabaam Sahdeeq and underground phenom Tha God Fahim on Killa II (Cypher at the Kumite). Produced by Jake Palumbo of SpaceLab Recordings, the posse cut is the closer on Rock's EP: FE26 the Ironsides, available now on all platforms.

Rock Mecca’s critically acclaimed LP “Ironworld” was released in 2018. The three years it took to make the album generated several outtakes, side appearances, and remixes that are now being released as a compilation EP dubbed “FE26: The Ironsides”

The properties of iron are being channeled here to bring you hardcore Hip-Hop in the form of 8 tracks, all bangers no filler.

Recorded at the Spacelab, a studio in Brooklyn, N.Y, which is quickly becoming a go-to spot for the cream of New York’s underground rap scene, a few frequent passerby's were pulled to the side to drop a sixteen as Rock was working on Ironworld.