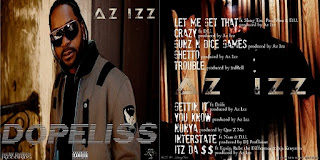 Together with Pace Won, Young Zee, Rah Digga, and D.U., the Brick City crew were noted for their work with The Fugees, Wu-Tang and a new emerging force from Detroit, D12.  More recently pursuing a career in tv, film and sports music production, Az has returned to the hip hop fold with his first major solo album in several years.  Largely self-produced with additional contributions by Qua Z Mo, DJ 3rdRell and DJ Profluent, the guest featured artists include several of his fellow former group members and further luminaries from the local independent scene including Drift, Rube the Difference and Jaja Kenyatta.

From boom bap to hard-driving electronic beats, the production maps the evolution of the east coast sound underpinned lyrically by the traditional art of storytelling, street life, aspirations and struggles.  Back in the game with another flag planted for the Garden State, essential listening.