Kosha Dillz - Nobody Cares Except You (Album) 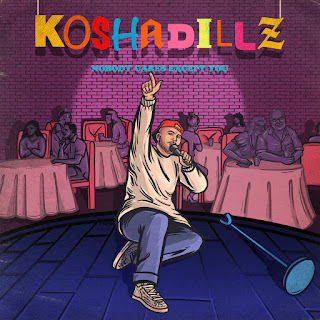 Kosha Dillz' 2020 album has been in creation since 2018. The 14-song album is produced in majority by Sam Barsh and 16-year-old Snowball Beats, but also includes 3 songs with #1 hitmaker Jeremiah Raisen aka Sad Pony, and a guest track from Kool Kojak. The ironic title was based on his self-realization that being self-seeking will never fulfill him entirely. Dillz' album clashes with the struggle of Nobody Cares vs. Nobody Cares Except You; a concept that can only be achieved with time, and something he has been exploring with the hope of developing a better relationship with his fans. Originally scheduled to be released in April on tour with RDGLDGRN and Little Stranger, COVID19 caused a huge burden in his plans including the canceling of a 28-city tour and multiple festival appearances.

After much-needed self-reflection before the push back of the original release date, this album morphed with different tracklistings into something it wasn't intended to be; authentic normalization in the pursuit of personal happiness by caring for one another, regardless of so-called industry rules and boundaries. The diversity in his songs needed to be on the same collective work to properly tell his story. We need Tommy PIckles, a Rug Rats adult anthem, on the same album as Is It Me, a braggadocio ego-driven confidence builder. We need Schmoozin', a Yiddish Klezmer party song on the same album as Solo, a heartfelt and collaboration with Gangsta Boo of Three 6 Mafia who raps about the death of her father… A collaboration with Matisyahu needs to be on the same album as W9, an independent blue-collar hustler anthem. All these works embody the many facets of who Kosha Dillz, or Rami, who has spent 12 years releasing music with some of the most sought out producers/songwriters. A guy who is known for using funny freestyles to deal with his personal darkness and hardships.

Stream/purchase the album and connect with Kosha Dillz below.