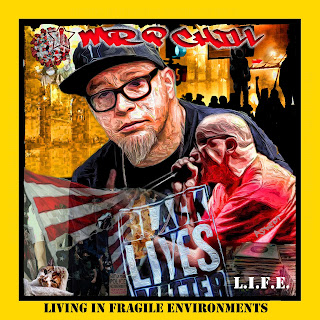 Originally going in Mr. P Chill planned on curating an album telling his story of a middle-aged musician grinding on the road and in the studio. However, as our world’s distressing future began to unfold and unravel, the album took on a rather different approach. Chill felt the need to react to Covid, racial genocides, and government and societal pressing issues through his music, and ‘L.I.F.E.’ was born.

This album is not for lighthearted masses, rather for those who absorb lyrical substance and ingenious wordplay…Mr. P Chill takes us into his realm of being a musician, how that ties into his personal life, and then climaxes into the living hell we call America.  The Circus, a metaphor for the music scene, touches on how a lifetime of sweat and grind now feels more like blood and tears as it’s taken a toll on him. Home is more refreshing as Chill awakens on a flight headed home, where there is no checkout time just his wife, family, and pets. Although what surrounds home has now sadly changed those three remain the same. Searching starts the chin rubbing and head-scratching as Chill reminds us how we're constantly searching for something yet find nothing. Life’s become a portal of abnormalcy leaving us digging for truths in places we’ve forgotten.

Diggin’ (Crate Digger’s Anthem) lightens the mood for Hip Hop purists, enthusiasts, and crate diggers around the world! Chill embodies the process of crate digging from beginning to end, the entire euphoric process…from wall to wall of hundreds of dusty records and mountains of wax to paying for cash and dapping everyone on the way out, to flipping them in the lab and adding drums and loops. He began digging in 91’ and his progression in style is quite evident.

Moring Coffee brings us back to the lecture at hand. While Mr. P Chill is drinking his morning coffee alongside his cat, he’s in disbelief to see where we’re at as a country. In his 40’s he succumbed to depression and contemplated his existence when stressors and challenges took over. It’s easier to remain lost or pop pills from prescribing brainwashers than to receive direction. Social Distancing hits hard with an intro from news reporters and purge sirens amplifying Covid-19 distinctive shutdown instructions. Chill speaks on not being able to live life…no shows, no friends, no family…just an unemployed MC stricken with uncertainty, until possibly 2022? Where Do We Go is an honest track that highlights an effective resolution. The world we live in resembles Worldstar, there’s so much wrong and our compass is stuck at twelve. It’s clearer than H2O we can’t turn to 45 because he’s simply built a wall to fight off America’s hopes and dreams. Mr. P Chill extends his hand to another human to express acceptance, let’s keep the chain united…Chill’s impeccably vivid storytelling in Freedom is sure to raise every neck and arm hair. He shares a tale of a single, poverty-stricken, mother determined to break free with her son, although there’s no family or friends where she’s headed, she’s walking until blisters won't allow her to walk anymore. Chill preaches on about tear gas, firing shots, and unnecessary violence during free assemblies of humans whose voices need to be heard.

Millions of Militants is what it will take to lift the rug, expose and exploit Trump and surrounding propaganda. Chill refuses to let racism become America’s or the world’s social norm. His f*uck Trump resonates through our ears while he stands firm with his fist to the sky next to his fighting brothers and sisters. Subliminal is about three minutes of guided jewels on how not to become programmed by our government. We must relax, breathe, and disconnect to find inner peace and ignite our own spark.  Reflections concludes the album with Mr. P Chill taking stock of his life and 40+ years of learned lessons. Although what he wanted as an MC just starting out is not the same as a vetted MC, his self truths allow him to continue to grow…F*uck fame, he’s content with health, his home, wife, family, and pets!

Overall, ‘L.I.F.E.’ is exactly what needs to be resonating through ears, hearts, and minds across the globe. Mr. P Chill offers a no-track-skip project that forces us to look in the mirror and define how we will react to pressing societal issues that continue to drag our country into depths of instability and alarming distress. The production brewing with classic Hip Hop cuts and scratches, knocking bass and drums, along with an incomparable kaleidoscope of soul, funk, and revolutionary cadences heighten Chill’s raw emotion throughout the entire album.  Stream 'L.I.F.E.' and connect with Mr. P Chill below.